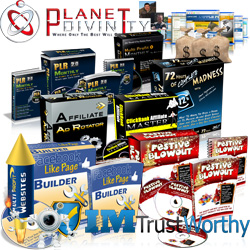 OK, so another year has almost passed us by again, doesn’t time fly when you’re having fun! 🙂
I’m going to go over some of the things that I have been up to this year, as posting regular updates wasn’t one of them! 🙂
As last years little competition was such a success, I’m going to do the same again this year and hopefully give some lucky reader $100 cash!
It’s real simple, all you have to do is to reply to this post with YOUR personal highlight of the year, I’ll then put all the names into a hat and randomly choose the lucky $100 winner!

So here’s MY personal highlights of 2011:

January 2011 – The first thing I did in January was to launch the new look for my Planet Divinity website, it’s kind of a central hub for me and home to some great turnkey websites.
I then told you about Matt Garrett’s Instant Article Videos, and how simple it was to turn all your articles into videos, the feedback I received on this was great!
Later that month was the launch of Michael Cheney’s My Millionaire Mentor, where myself and John Thornhill teamed up to put an awesome bonus package together with the hope of providing you all with some great content and also win his affiliate contest at the same time, we did win it thanks to all of you and we gave over $2,000 to charity too.

February 2011 – In February I re-launched Multi Profit Monthly with John Thornhill, a 12 month course where we show people how to duplicate our success, using all the methods that we have used to succeed online.
Then John Thornhill launched his excellent One Month Mentor program, which is 31 days of TOP QUALITY training, aimed to get you started FAST!

March 2011 – The first thing to come in March was a superb free eBook from my good friend Daniel Sumner, that shows you exactly how to create and more importantly market an eBook, it was called The eBook Cycle.
Later that month myself and John offered you $8,174+ worth of just about all of our best selling products for what can only be described as a truly INSANE price, it was 72 Hours of Complete Madness!

April 2011 – In April my good friends Tony Shepherd and Tony Newton launched a cracking 4 week training course that basically shows you how to create and Flip WordPress Blogs! Awesome stuff!
later that month Myself and John Thornhill launched a fantastic piece of software that creates Facebook like pages in under a minute, it was called Like Page Builder, and the best part was we gave you it for FREE!

May 2011 – In May I had been working behind the scenes with Omar Martin to create a FREE source for you to find out all about the people and products online, it was called IM Trustworthy, and it’s now very widely used and respected.
May was also the time that my good friend Stevie at GFX-1 created a brand new collection of Over 1,500, High Quality, Professional Website Graphics, excellent for ‘instant’ web pages that look amazing!
Later this month my good friend Lee McIntyre released a controversial free video where he revealed the 3 weird little strategies that he used to build a SEVEN FIGURE online business in record time, it was called Instant Internet Lifestyle and it really was lifestyle changing stuff!
Later that month my good friend Socrates Socratous launched a ‘killer’ product, it was called Killer Content and it was that good that I offered a BONUS of over $1,594.00 just for anyone who purchased through my link! Cracking stuff!

June 2011 – June was when I launched Affiliate Ad Rotator, this was a product I teamed up with John Thornhill on, basically, it displays and rotates ClickBank IMAGE banner ads. We all know how well images work instead of just plain text, well, this gives you the perfect ads for your websites or blogs, we even have an option for users to add their own ads to our database, giving excellent exposure!
Around mid June, John Thornhill and Keith Purkiss launched Push Button Giveaway, a great product that basically makes using giveaway events ‘push button’ 🙂
Soon after that I launched PLR Monthly 2.0, myself and Daniel Sumner made this to be what we think is the greatest PLR resource site in the world… Bar none! We added a shed load of content to our already great content, far too much to list here! Around the end of June my good friend John Thornhill launched a ‘Warrior Special Offer’ for only $12, it was called Affiliate Promo Formula, giving you a blueprint of how to make BIG bucks with affiliate promotions.

July 2011 – This was when John Thornhill launched his $497 Coaching Program for only $19, no catches or anything, just a single $19 payment for his cracking coaching program.
Around mid July was when my good friend Omar Martin launched his excellent ‘My Unfair Advantage‘ which was basically some TOP quality software, training and support from REAL experts. This was so good that I also offered a $497 BONUS just for anyone who purchased through my link!
Near the end of July I teamed up with John Thornhill to launch ‘72 Hours of Complete Madness‘, we really went to town with this one, giving you 3 days to grab an AWESOME package of products, if you missed this then you should kick yourself! 🙂

August 2011 – The start of August was when me and John launched Multi Profit Monthly in a $5 Warrior Special Offer, this was an amazing success and if you took advantage of it then you got a superb deal for only $5!
Later that month we launched the Simple Success System series, the first one shows you via FREE webinar, how we generated over 8 million from multiple income streams! Soon after that John launched another, called 3 Steps to Success.

September 2011 – At the start of September my good friend Jim Cockrum launched a cracking course called quite simply The Proven Amazon Course, with Amazon getting even bigger and Jim’s extensive knowledge and experience, it’s no surprise that this was an amazing success for him!$
Around the middle of September John launched another great WSO, this one was called Profit from PLR, you basically got a great $97 product for only $5! Soon after that my good friend Alex Jeffreys launched an awesome FREE report showing you how he generated 1 MILLION in just 21 days, and how you can do the same too, it really was good stuff!
Around the end of September Jim Cockrum launched a great bok that was basically the result of a decade worth of ideas that Jim has collected and found REALLY work, it was called Free Marketing, and it really was an excellent read, Jim also gave the proceeds to charity…What a guy!

October 2011 – The first thing that highlighted October for me was an excellent bit of software from Robert Black, this usually sold for $77, but as a WSO you got it for just $5 ($10 now), I thought this was great!
Around the middle of October I launched an AWESOME WSO with John Thornhill, we offered you one of our best selling $197 products for just $5, it was Multi Profit Websites.
At the end of October John launched his excellent WSO Domination, this gave you a step by step blueprint to creating a WSO and making money from it. As with any great product I also offered a BONUS again too!

November 2011 – This was when we launched ClickBank Affiliate Master in a WSO special for only $5! It’s an excellent piece of software that allows you to create multiple ‘custom’ ClickBank affiliate links and pages, we use this software on just about all our products, and it helps pull in thousands, if not TENS of THOUSANDS worth of ADDITIONAL sales.
Around the middle of November was when my good friend Stevie B launched a cracking Video Template Pack in a WSO, you guys loved this!

December 2011 – Well I’m sure you can remember this, but I teamed up with John to give you guys yet another AWESOME BONUS, this time it was for PLR Jackpot, an awesome PLR package. Oh, it’s available again for a limited time if you missed out!
Around the middle of December myself and John launched our hugely successful WSO Success program, this sold out right away, but you can still get on the waiting list for next time.
Soon after that my good friend Stevie B launched another ‘PREMIUM’ Video Template Pack via WSO, another great essential!
I’m sure you saw our Festive Blowout just after Christmas, this really was an AWESOME package of some seriously high quality products from us, I hope you managed to grab it before it was gone, if you missed it then you missed a treat! 🙂

OK, so that’s basically my highlights of 2011, I also did a lot of ‘behind the scenes’ stuff, which I’ll tell you about some other time!

Sorry if this post went on a little longer than expected, but there was a lot to fit in!

Remember, if you hit reply and let me know your marketing highlight of 2011, I’ll put your name in a draw for $100 cash!
I’ll make the draw in a week or two and send the cash instantly! You must be able to receive the cash via Paypal, if you cannot and you still wish to enter, I will donate the cash to a deserving charity in your name.

Please make sure you use your best email address when you reply, as I will need to contact you on it if you win!

As you probably already know Multi Profit Websites (MPW) launches on Tuesday the 27th of October.

Myself and John Thornhill have spent almost 3 years and well over $100,000 developing this product, that we hope will help all you guys out there that struggle to create your own websites.

Multi Profit Websites really is the website anyone can build, without any previous skill or knowledge  in 3 easy steps.

We started pre-launch last week and if you haven’t seen our first video you can check it out here:

In that video you will find out how John and I got started and also how powerful MPW really is!

Since we launched that video we have had a ton of questions.

Here are some of the most common questions that we have had, If you have a question please leave a comment below and I’ll get back to you.

Q: Is there a limit to how many websites I can create?

Q: Who hosts the sites?

A: You do, they are your sites and we want you to have full control, this means you host all of the sites you create yourself. Don’t worry if you’ve never hosted a site before as we show you exactly what to do.

Q: How will I generate an income from the websites I create?